Ven. Nyima Gyaltsen was born in Dhargyey, which is part of Kham in eastern Tibet. He lived at home with his parents until he was fourteen. Nyima attended a small local school for four years, and at the age of fourteen entered the school belonging to Dhargyey Monastery, where he was able to live as a boarder. He studied logic and received teaching on the stages of the path to enlightenment. He left this school at the age of eighteen and spent one year at home helping his parents because by this time his mother was ill. He then received permission from his parents to travel to India in order to become a monk in Sera Monastery.

Since he had no travel permit, he risked imprisonment if he was caught. Together with twenty-five others, he made his way to Lhasa by truck. They then travelled on another truck until they reached a place called Lhatse, from where they had to cross the Himalayas on foot with the help of two guides they had hired.

They reached Nepal safely and in November 1991 Nyima entered the Trehor Regional College, a part of Sera Je at Sera Monastery in South India. From 1991 until 1997 he followed the curriculum of monastic studies there. In 1997 he went to Dharamsala, the seat in exile of His Holiness the Dalai Lama, to take care of the Ven. Geshe Sonam Rinchen. In the same year he began his studies to become a thangka painter.

He was fortunate to be accepted as a student by the Ven. Sangyey Yeshi, a distinguished Khampa thangka painter, who painted many thangkas for His Holiness the Dalai Lama and was during eight years an official painter for His Holiness’s Private Office. His Holiness then appointed him to teach courses in thangka painting at the Library of Tibetan Works and Archives. The course of studies that Nyima Gyaltsen followed lasted for six years.

Ven. Sangyey Yeshi also oversaw all Nyima’s work privately during the training period and for several years thereafter. Nyima spent four years practising drawing and learning the various iconographical proportions (tigtse) in great detail. The last two years of the course were devoted to learning painting techniques and how to paint elements of the thangka other than the main figures. Since qualifying Nyima has completed more than thirty thangkas, including some very large ones. These are now in various collections around the world.

In 2004 he accompanied Geshe Sonam Rinchen on a tour of Australia and New Zealand. During this time he taught several workshops on thangka painting and also demonstrated the art of thangka painting in the Auckland Museum. He made three further visits to New Zealand following that. 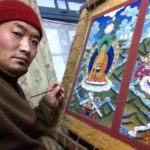